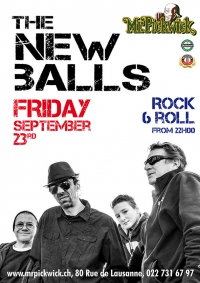 The New Balls were founded by Otto in 2009 in some -at first hopeless- attempts to create a follow up on the (old) Balls. After numerous changes, Willem joined the band at 8(!) years of age. He is today a fully fledged member of the band. Dr Watson joined in 2011, bringing his encyclopedial knowledge of rock, soul and blues as well as his professional skills on Bass, Vocals and keys. Since November 2013 Dan Lica had joined the band on keyboards. After having recorded our second album in May-June 2015, we are currently operating in a new formation, with Yannick Humeau on Bass and Donato cerghetti on keyboards