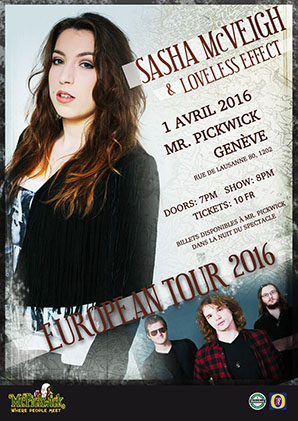 British singer/songwriter, Sasha McVeigh, is a force to be reckoned with. Having been named UK Country Radio's 'Female Vocalist of the Year' as well as an artist "on the brink of a breakthrough" and "one to watch" by Taste of Country, Sasha has been leaving her mark on both sides of the Atlantic. Sasha has performed with the likes of Eric Church, The Band Perry, Brad Paisley and Sam Hunt at some of the biggest country music festivals in the United States, in addition to sell-out dates on her headline tours on home turf. Her music, matched with a unique, smoky voice, is honest, direct and gives fans an insight into her story.

What do you get when you combine three best friends, a passion for creating music and a hunger for wanting to share that passion with the world? You get Loveless Effect, a unique blues-rock band from Buckeye, Arizona. Drawing from shared influences such as Led Zeppelin, Foo Fighters and Rush, but also their individual influences, has resulted in a melting pot of genres and styles that have moulded together to form the bands’ signature sound.