Mr Pickwick pub will be temporarily closed from 19th of July to 11th of August due to renovation works. 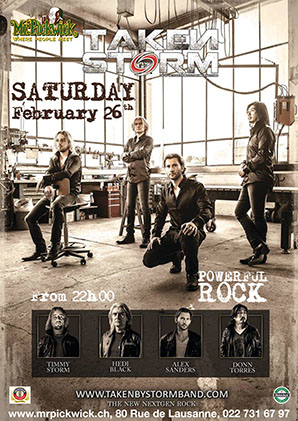 TAKEN BY STORM is primarily a story of chance encounters with artists sharing the same passion f...or music.

For the past three years the group has been writing songs for their new album while successfully performing on the biggest European stages as the Nirvana tribute group Smells Like K. Spirit. The group has played at prestigious venues like the Olympia in Paris, the Montreux Jazz Festival in Switzerland, the Belgrade Beerfest (120,000 spectators) in Serbia, the Fetes de Geneve in Switzerland, the Galaxie Amneville in France, and many other major cities and important theaters in Slovenia, Croatia, Serbia, Italy, Belgium, Luxembourg, France, and Switzerland

Strengthened by their “LIVE” performance experience, they work together perfectly as musicians and therefore decided to create a new group TAKEN BY STORM. Their friendship, built both on the road and on international stages, enabled them to start a new musical adventure with a solid foundation.

With a casual look and edgy sensitivity, Timmy Storm is the voice and guitarist for TAKEN BY STORM! On the bass is Donn Torres, multi-talented California musician who, in his long career, has had the opportunity to rub shoulders with great artists from the US and Europe. Hedi Black, experienced artist and in many cases the tireless leader of the group, lends himself to the role of the drummer. Alex Sanders, European's greatest guitar player joined the band on nov. 2014. With these four dynamic artists the group is ready for takeoff!