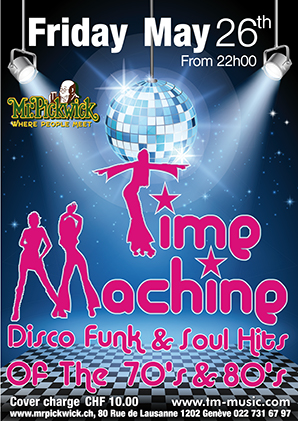 With close to 650 shows to date, Geneva (Switzerland) based TIME MACHINE has earned a great reputation as one of the very best and most entertaining live Swiss bands, confirmed after its huge successes at the 2013, 2009 and 2008 Montreux Jazz Festival as well as countless private, corporate and public shows worldwide in places like Beijing, Venice, Florence, Marrakech, Birmingham, Verbier, Zermatt, Zurich, St-Moritz ...

TIME MACHINE has the professionalism and talent to perform the classic disco-funk and soul hits of some of the biggest legends in music history, such as Michael Jackson, Aretha Franklin, Stevie Wonder, ABBA, Bee Gees and Donna Summer to name a few.

TIME MACHINE’s lineup includes two highly charismatic and talented singers-dancers and a tight 4 members’ rhythm section.
Much more than a cover band,TIME MACHINE puts on a 100% live festive and dynamic show including choreographies and pays tribute to an era - the seventies and eighties. In glittering disco outfits, the band embarks on a journey through time, to the delight of listeners of all ages who dance and sing along, often after the very first song !

TIME MACHINE is, above all, the exceptional musical synergy of a unique group whose enthusiasm and energy fulfill its ultimate goal: to offer you an exciting and unforgettable evening, anywhere in the world!